The moment Jerry Lee Lewis appeared on the Palomino stage at Stagecoach, time stood still. It is safe to say, this was a rare and relished performance . Nicknamed "The Killer," at 81, he is still that. Piano skills, charisma and songs from an era long ago, bring back a time quite different to now. Memories of youth and rebellion and innocence combined. Pure music, raw and on fire. 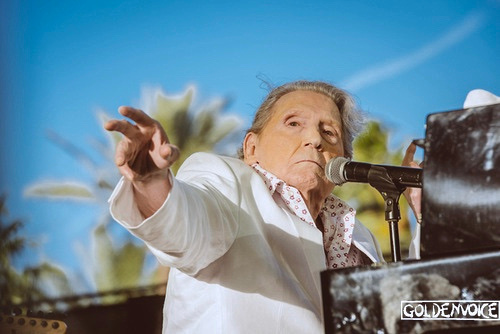 Jerry Lee Lewis could be described as one of the original temperamental rock 'n' rollers, whose life was full of hardship and tough times.  Playing classics "Great Balls of Fire" and "Whole Lotta Shakin' Goin' On" was simply breathtaking. The piano playing, the voice and his characteristic "growl" of younger years never wavered.

Earning several Grammy awards and a Lifetime Achievement Award, Jerry Lee Lewis was inducted in 1986 to the Rock and Roll Hall of Fame. There was also a 1989 biopic film called "Great Balls of Fire!" directed by Jim McBride and starring Dennis Quaid.

A rare treat 'old school style' at the first day of the Stagecoach Country Music Festival.

*PRODUCED BY GOLDENVOICE AND THE MESSINA GROUP