With the upcoming EP release of 'Salt in the Coffee' debuting June 8th, things are looking sweet for duo Kaci Brown and Sam Gray. I wanted to get a little insight in this unique pairing who's recent hit song Top Down released 2017, is the perfect song introduction for whats to come.

*Kaci Brown's career took off at the age of 10 when she won "Little Miss Texas Overall Grand Talent".  Her family moved from Texas to Nashville to further embark in the country scene.  She also ventured into pop and toured with The Backstreet Boys. She has written and collaborated for several artists and albums.

*Sam Gray is a singer, songwriter and producer from England and has composed multiple songs for various artists.  Among several musical accomplishments, Sam has also toured with artists The Overtones, East 17, Westlife, David Ford, Charlie Simpson and Peter Andre. 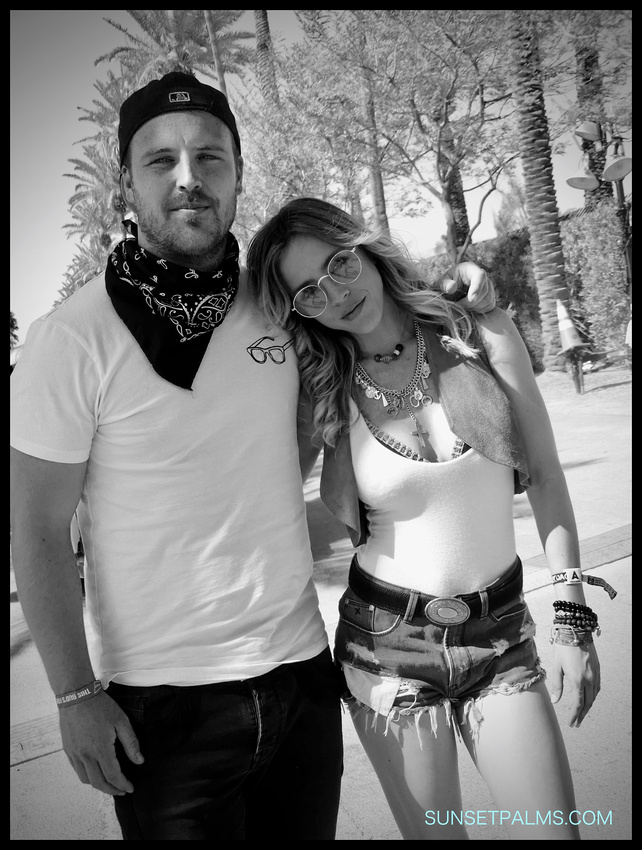 Texas and England, how did you both get together to collaborate?

Sam: I wrote a song called Top Down in England. I didn't expect to write a country song really, it just kind of came out and it ended up making its way over to Los Angeles. I sent the song over and they really loved it. They (Notting Hill Management) said "Hey, you know what, this is a 'cool song' but we feel like it could be a duet."

So you two had never met prior to that?

Sam: Never, that was the first time we met, for the song.

Kaci: I was managed by Notting Hill at the time and it's published by Notting Hill. It's a small, kind of in-house boutique, independent label, managers, and publishing house. They really believed in Sam and everything he is capable of and they believed in me.  They had this idea and lets just see what they sound like together. They didn't know what would come out of this at all, and it turned into being a pretty cool thing.

So the first time you sang, you sensed the chemistry?

Kaci: When we heard it back, we definitely heard that it was great and that we sound really good together!

Sam: I think we sound great together but also we get on so well.  We just have fun and that brought out the best with Kaci's voice, the session and best out of the song. I believe in the magic of the situation and the song. That day we met and every day since, has been like that.

Kaci: If you watch the music video for Top Down, we are just hanging out in a convertable driving all around.

Where was that filmed?

Kaci: All in California. The last scene was in Zuma, but we started northeast and drove to the ocean. Started early and we just drove.

Sam: We just drove and drove, it was great!

So when you wrote Top Down, what did you have in mind writing this? Did the video concept come to mind?

Sam: The video just comes with the whole thing. Just imagine staying in London and it's raining.

This is what I find interesting is it's the complete opposite. Fun summer song!

Kaci: This whole thing is interesting for all of us!

Breaking new ground just from your different backgrounds coming together. Country with a pop vibe.

Kaci: I'm Country and Sam is Pop and now we are just in it.

Sam: Everything we've done and now it's about good songs!

Kaci: We've written a whole album. We've been working on these songs for a whole year now and we are very, very happy. We didn't release anything yet because we are really picky.  We don't want to just release content for the sake of releasing content. If we are putting our names on it, together, we want it to be good sonically and production wise.  We want it to represent how great we believe and feel the songs are.

Sam: Now that we are playing more and more live now with the band, the songs came into their own. We were able to go back into production and get to where we know it sounds great.

Kaci: Also, playing live responding to the live band and reaction, slower, faster,  tempo, order, organically what comes together. What the people respond to, the fans, and telling us. Us and the music, and the album now. Really excited!

What about your solo careers?

Kaci: You know what's cool about this? I'm so creatively and professionally fulfilled doing this.

Kaci: I love the work, I love Sam, I love the whole process, that if the day comes, it comes, but at this point, it really is on the back burner. If it is even on a back burner, because we love this so much!

Sam: This is what we are basically about now. 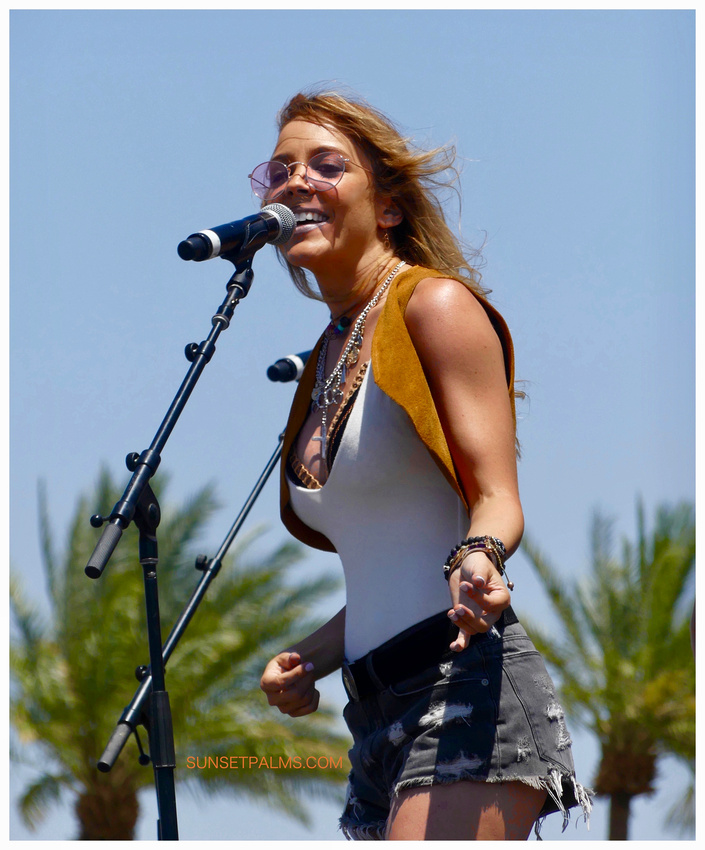 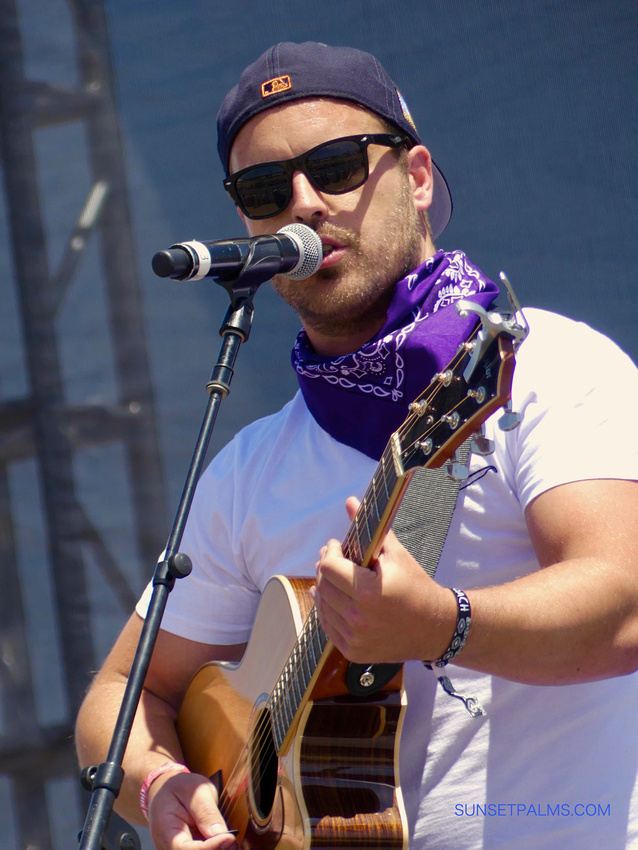 Was this the first time for either one of you at Stage Coach?

Kaci: This is my first time even here, and we're playing.

Sam: We've been hanging out, and seeing people like Kacey Musgraves, it's awesome.

Kaci: I'm from Sulpher Springs, Texas and Kacey Musgraves is from Mineola, Texas. I went to school with a girl named Elena Tatum. Elena Tatum and Kacey Musgraves were in a yodelling duo called the 'Texas Two Bits'. So we all played the Texas Opry circuit, so I grew up singing at the same places. I have a picture of Kacey and I with cowboy hats, chaps, boots and all that and we were like eleven.  I got a big gap between my front teeth and I WILL NEVER SHOW THAT PICTURE TO ANYONE!

Kaci: IT IS NOT HAPPENING!

Sam: YES YOU WILL!

Kaci: So it was awesome you know, just seeing her and I thought how crazy is life? We were on the same stages 20 years ago essentially, and now we're both here at the same place.

Life is so bizarre.

Sam: And I love this place. The California lifestyle. Also you get the wafts of BBQ going around. It feels so in the country.

I love it too being from Canada.

Have you been to Canada?

Kaci:  I have! I actually toured with The Backstreet Boys in 2006. I was the opening act. I did the entire Canadian run. It was beautiful. I didn't get to spend a lot of time in each city, because you are on a bus and you know you go from place to place and you are always by the venue.  But I remember going to the Eaton's Center, and I remember trying 'poutane'.

How popular is country music becoming in the UK?

Sam: It's a lot more mainstream these days. It's a lot more internationally accepted now. I've always been into it. Johnny Cash, Kenny Rogers and Shania Twain. The music/songs are so good. Good songwriting.

What are some of your early influences?

Sam: Shania for one. Classic songwriters like The Beatles, Paul Simon and Coldplay.

Kaci: So a lot of western swing and then random, and I mean random as in the genre wasn't consistent with my mom. So we would go from Celine Dion to Gloria Estefan to Kenny G. Like she would play that all of the time.

Kaci: For country music, it was like the early nineties, so like Shania Twain, Trisha Yearwood, Faith Hill, and The Dixie Chicks. I was really influenced by all the early nineties. Also I sang covers of Brenda Lee, Patsy Cline and all of those records and so when they are playing today, I know all these songs!  I didn't listen to any pop music. I really didn't know even Michael Jackson's music until I went and watched the documentary, and then I really fell in love with the making of him and all the things I didn't know. It just wasn't part of the culture from where I was from. So going into pop music, I loved studying voice and figuring out how to make different sounds and hitting notes in a different area. I'm still hanging with Sam, still trying to learn how to do runs.

You learn from each other.

Sam: Yes! I love Kaci's professionalism as well as her energy. I just get so much from her energy.  Also, her song concepts. She's got it.

Kaci: It all pulls from life though.

Sam: Yes it does. 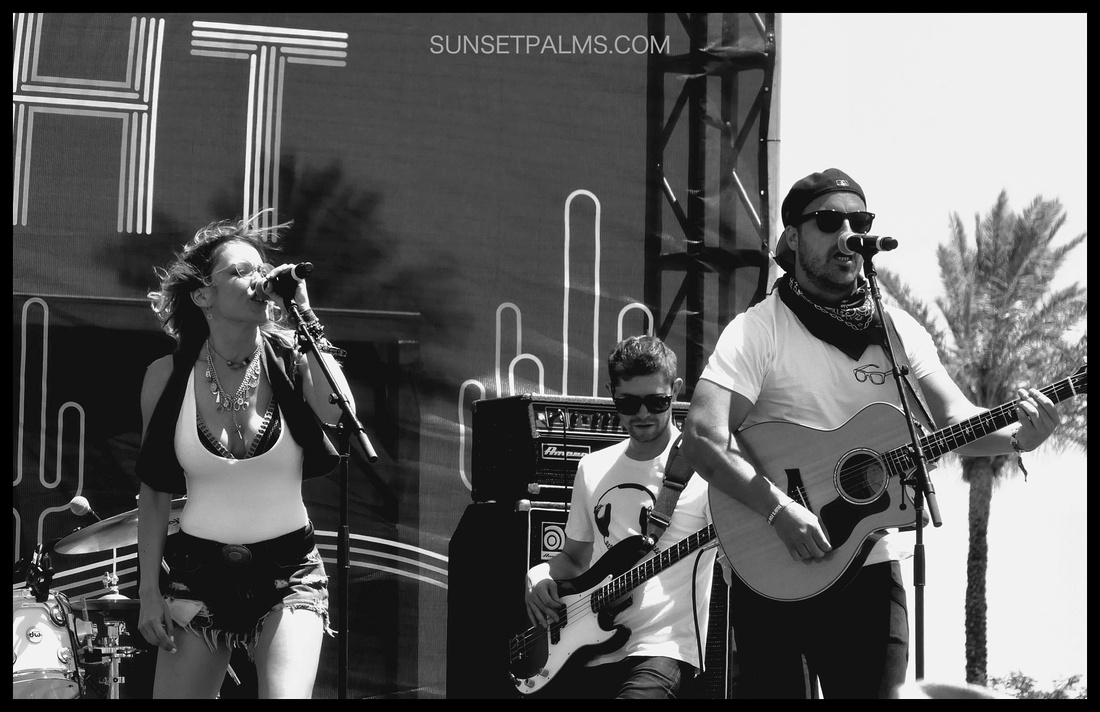 "Salt in the Coffee" EP

This Is the Stuff